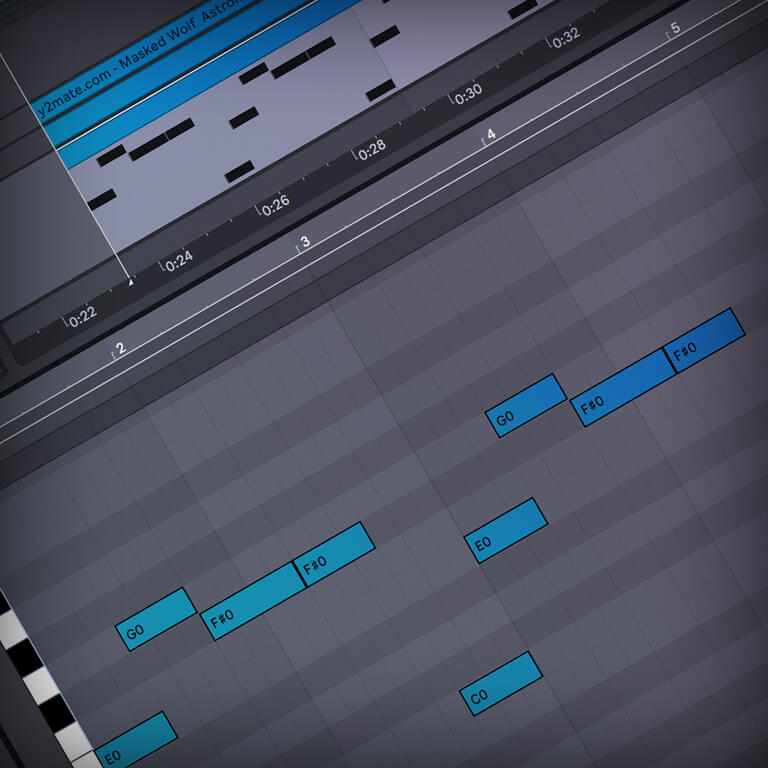 In order to create a perfect 808 bassline, you need 2 things: a hard-hitting 808 that matches the character of your arrangement and a decent pattern. Therefore, I’d highly recommend checking out the following 808 resources as well.

Now that we got this out of the way, click on the button below to download the 10 patterns we’re going to take a closer look at now. Disclaimer: These MIDI files include information taken from popular Hip Hop productions, so they’re meant for educational purposes only.

The first pattern is taken from Saweetie’s and Doja Cat’s “Best Friend”. While being quite fast with a tempo of 186 BPM, the 808 stays on the base note E for the majority of the time, with variations at the end of every 4 bars. As usual for 808s, the rhythm is syncopated.

Next up is Trippie Redd’s 154 BPM fast Miss The Rage feat. Playboi Carti. Compared to the previous pattern you get way fewer notes with long breaks between each hit. The bass follows the route notes of the beat’s synth chords melody.

“Every Chance I Get” by DJ Khaled, Lil Baby, and Lil Durk has a syncopated 808 line staying on G for 8 entire bars. Right afterward it drops down to D. The 808 is rather long, there’s no space left between any hit, and there aren’t any crazy fills.

Drake’s “Wants and Needs” has, with a tempo of 136 BPM, a slower feel to it that stays once again on the same note, which is in this case a really low B. At the end of every 4 bars, there’s a fill.

Even slower than that is Doja Cat’s and The Weeknd’s “You Right”, with a tempo of 129 BPM. The 808 is slow, clean, and follows the route notes of the chords. No space is left between the notes and there aren’t any notable fills or variations. However, some of the notes have a slight pitch bend, which sounds like one note is sliding to the next one.

If you’re regularly on TikTok or Instagram there’s no chance you aren’t recognizing Masked Wolf’s “Astronaut In The Ocean”, which is 150 BPM fast. Once again the rhythm is syncopated and based around 4 notes: E, G, F# & C. The arrangement of these notes compared to other songs makes it extremely noticeable, although the rhythm and notes on their own aren’t even that special.

Another hit you couldn’t escape from in 2020 is Cardi B’s and Megan Thee Stallion’s “WAP”. The pattern is extremely slow and low and only consists of the 3 notes: B, C, and C#. The special part about this is, that 3 notes laying right next to each other usually don’t appear in a normal major or minor scale.

Talking about huge hits, “WHATS POPPIN” by Jack Harlow, Dababy, Tory Lanez, & Lil Wayne is based around 145 BPM. Once again, the 808s are rather short and there’s a lot of space between the notes. Most hits are based around the route note E, but they’re also a bunch of variations on G and B.

Rockstar is with 180 BPM quite speedy. And although the notes on their own aren’t anything special once again the combination can instantly be noticed by anyone who is familiar with the song. Although there’s once again a lot of space left out, you’ll also find sequences of multiple notes right after each other, for example at the end of every 8 bars.

Future’s and Drake’s “Life is Good” comes with a typical Drake 808. The pattern is simple, with a lot of empty room, no fast notes or fills, and from a sound design perspective, the bass sounds pretty destroyed. The song has 164 BPM.

So what can we learn?

Now that we listened to all of these beats, what did we really learn about 808 patterns? What can we really get out of it? Well, I think most songs can be categorized by 3 things:

3. Simple patterns without any fills or variations vs. more complicated stuff with rolls etc.

Whenever you have cooked up a decent melody sample and it’s time to add a bass, try out these variations and you should be able to come up with something that matches your arrangement. Oh, and if you liked this post and would like to learn more, go check out this read about the most common Boom Bap drum patterns as well.