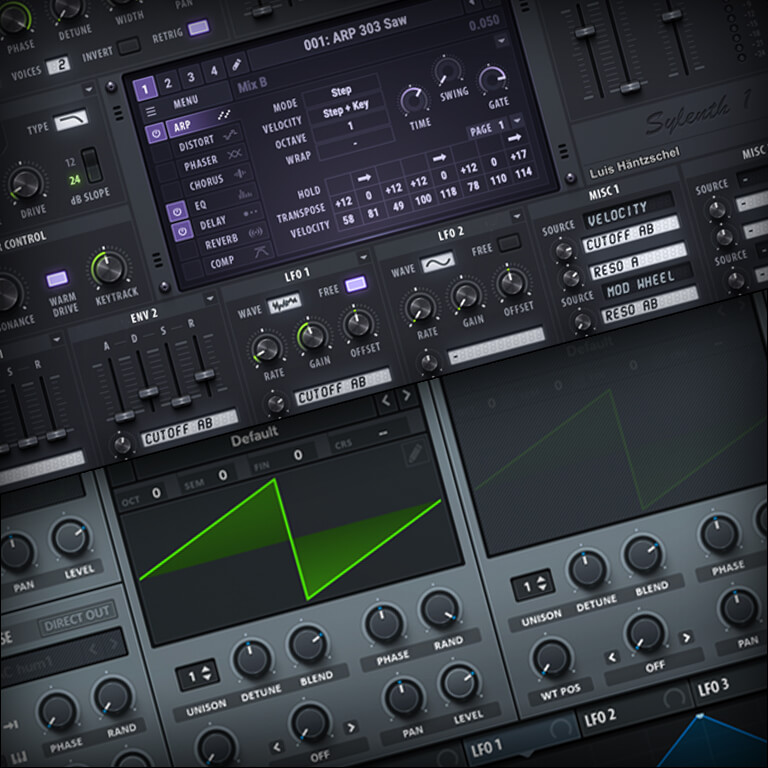 Serum vs Sylenth (All Pros & Cons)

There are countless software synths available these days, so it’s hard to find the ones that are actually worth spending any money on. Two the most popular plugins are Xfer’s flagship synth Serum and Lennar Digital’s Sylenth1. Although both are without any doubt great tools, they still have quite a few differences. In this post I’ll go through all the pros and cons of Serum vs Sylenth and will eventually make a recommendation on which to get first. Let’s go.

The interface or GUI is the visual part of the plugin. Although you might think that it isn’t that important, you’ll still see it every time you’re working with the plugin and things like the overall arrangement of different sections can have a big impact on your productivity.

Serum is a synth with a great visual feedback. No matter if you’re adjusting an envelope, LFO, waveform or filter, you basically get visual feedback for almost everything you’re doing. This is especially great for beginners, who aren’t that familiar with synths yet. Furthermore, there are plenty of little workflow features included. For example: you can double-click to type in values with your keyboard, “cmd + click” to reset parameters or copy a LFO curve to another one. And these are just some of many useful tricks.

Did you know? Xfer released an update allowing you to install different Serum skins.

Sylenth in contrast has a GUI, which reminds more of an “analog” synth. That said, there isn’t any visual feedback at all, which isn’t a big problem if you are already familiar with the basics of sound design. However, if you’re completely new to it, it might be harder to figure out what every knob is doing. Anyways, the structure is still logical and if you’re not a fan of the design you can simply install a custom Sylenth skin.

The overall functionality is probably the biggest difference between both synths. Yes, Sylenth1 is great for creating all kinds of basic sounds, but in contrast to Serum you actually can’t do that much with it. Here’s what I mean.

Every Sylenth oscillator comes with 8 basic waveforms. Serum in contrast comes with 144 different wavetables, each consisting of up to 256 waveforms. But that’s not all! It also allows you to import third party wavetables, edit wavetables and import samples to create completely new tables. And if that wasn’t enough, every OSC further comes with 22 warp modes, empowering you to process and modulate waveforms in real time. Additionally, there’s a noise oscillator you can use to load audio samples.

Or in other words: Serum clearly wins the OSC battle.

The next part I want to talk about are the modulation possibilities. Just like with the oscillators, Sylenth’s 4 LFOs are limited to 11 basic shapes. Using Serum in contrast you can literally draw any kind of LFO curve + you can use up to 8 different shapes at once. It also comes with some additional modulations sources, including Chaos or NoteOn Random. In Sylenth, mostly basic parameters like cutoff, resonance, pitch or phase can be modulated. In Serum, almost everything can be modulated. I could write down some additional features, but I think the point is clear once again.

You can simply do more using Serum.

Time to talk about the effect sections. Sylenth comes with 7 effects, Serum with 10. I know that the quantity doesn’t say anything about the quality, but I feel like I can do more using Serum’s effect chain. And again (I know I’m repeating myself) almost all effect parameters can be modulated in Serum, while you can only modulate cutoff, resonance, phaser frequency and distortion amount inside Sylenth.

At this point it should be clear: Serum offers more features. But does it even sound good? Well, there are a lot of people claiming that Sylenth1 sounds notably warmer than a lot of other, digital synths do. So I put it to the test.

I opened up both plugins on different tracks, but with the same MIDI clip. I started with a plain saw wave on both synths, matched their volumes and.. I couldn’t hear any difference. So I added 7 additional voices, tried to match the detuning of both synths and.. still almost no difference.

Sure, I could have also tested filters and effects, but I think at a certain point you wouldn’t be able to tell if the differences in sound are due to the synth or just the settings.

So here’s what I think: Maybe Sylenth sounds a bit warmer than other synths do, but the basic shapes (without any processing applied) don’t seem to sound any different than the ones from Serum. Both synths sound great, but Serum offers more possibilities.

For me, Serum is the winner.

Serum vs Sylenth: Which synth is better?

If you read through this whole post you might have the impression that Serum beats Sylenth in every aspect, but that’s really not the case. Sylenth is a great sounding synth! I simply think that – if you have a limited budget – you should get Serum first. It’s easier to learn and most presets you can create in Sylenth, can also be made using Serum.

First, head over to pluginboutique.com and purchase a license of Serum. Download some free presets, watch a bunch of tutorials and get used to the synth. If you feel like it’s time for adding a new plugin to your collection visit Lennar Digital and get a copy of Sylenth1 (or another instrument you’d like to get your hands on).