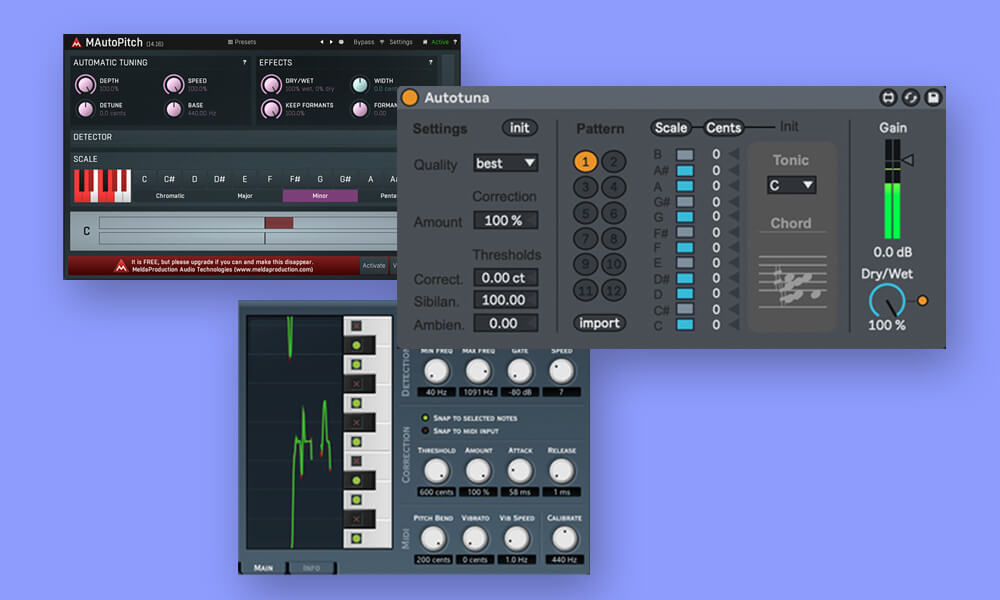 Pitch correction plugins like autotune have become indispensable for modern music producers. Just listen to records made 1 or 2 decades ago, and you’ll notice that vocals didn’t sound as “polished” back in the day. This shows that most of the time autotune is used, you don’t even recognize it. But, once it’s missing, you definitely do!

Unfortunately, the original “Auto-Tune” plugin by Antares comes at quite a high cost and therefore isn’t easily available to anyone. However, Antares isn’t the only manufacturer that figured out how to create pitch correction plugins, and some alternatives are even free. I thoroughly checked all the available options and came up with this list of the best free autotune plugins you can get in 2022 for PC and Mac.

Before we look at these options in-depth, let’s answer what autotune is in the first place!

“Auto-Tune” is an audio processor by Antares which allows producers to correct pitch imperfections in post-production. Extreme settings can result in a robot-like effect, first used by Cher and later popularized in Hip Hop by Kanye West and T-Pain. However, subtle settings aren’t noticeable and are used on most records that include singing today.

MAutoPitch is the clear winner among free autotune plugins. You’ll get a clean, modern interface with 2 simple controls for correction depth and speed. Additionally, there’s a “keep formants” control, which is supposed to make the pitch correction sound more natural. You can further fine-tune the plugin’s pitch detection using a threshold, filters, and stabilization time. All Major, Minor, Pentatonic, and the Chromatic scale can be selected super fast. Still, you can create your own scales by activating and deactivating single notes utilizing the piano illustration. But most importantly: it sounds pretty damn good for a freebie.

Next up is the freemium version of Graillon 2 by Auburn Sounds. Once again, you can easily control the amount and retune speed, plus you’ll also get a control to “preserve formants.” But in contrast to the MAutoPitch’s Detector parameters, there’s a single “snap range” feature, which controls “How far the Pitch is willing to be corrected to stick on an enabled note.” Unfortunately, notes can only be activated and deactivated by clicking on the belonging piano keys. So setting the correct scale can take a bit more time. Nevertheless, Glaillon 2 sounds ok to my ears, and I like the simplified controls. I also want to point out that the pitch shifter you can find in the bottom-left corner sounds incredibly good compared to others I have tried.

GSnap is a plugin I downloaded for the first time about 10 years ago. But just because a plugin is old, it doesn’t necessarily need to be bad. Similar to previous mentions, GSnap comes with a detection section, including filters, a gate, and a speed knob. It also has a correction threshold, amount, and 2 separate controls for attack and release. You can also select whether the pitch correction should snap to the notes you can choose via the piano illustration or the MIDI input. Although there are many options, I have a hard time making it sound the way I want. In fact, the many options might even overcomplicate the whole process.

No question, Voloco is the plugin with the least knobs to tweak. However, this might even be useful for someone who just wants to add a quick autotune effect to a demo and move on. There’s a dropdown menu with 6 presets, including 2 I’d categorize as pitch correction. You can also select the key and various scales through a dropdown menu. Other than that, there’s only one parameter left, which controls the correction amount. I think no one would use this on a serious project, but as I said, it’s great for quick demos.

Last on the list is a Max for Live device called “Autotuna.” Since this is a Max for Live Device, it’s only available for Ableton Users. You can select its quality via a dropdown menu and adjust the correction amount. Additionally, there are 3 more controls to fine-tune the device’s behavior, including a correction threshold in cents, a sibilance threshold, which allows you to leave sibilances unaffected, and an ambiance threshold, which let’s quieter parts like noise or reverbs tails pass through.

Setting up a scale is quite complicated, but a version from Beat Lab makes the whole process easier. I haven’t tested this tho. The big problem with Autotuna is that it sometimes turns an incoming source stereo while leaving it in mono other times. And I simply can’t figure out why. Also, when using the dry/wet control, the wet signal is significantly delayed, which results in quite a cool slap delay effect, but I guess this isn’t how this is supposed to work.

Before downloading every free autotune plugin you can find on the internet, you should check whether your DAW comes with a stock option. I’m using Ableton Live, which unfortunately doesn’t have one built-in as I’m writing this, but I know that other DAWs do.

Pitch correction plugins can usually be divided into two categories. Tools that allow you to edit each note individually like Melodyne, and tools that process incoming auto in real-time like Antares Auto-Tune. Although all free options fall into the latter category, I’d like to include the information that FL Studio offers both options. A counterpart to Melodyne called NewTone and a counterpart to Antares named Pitcher.

Just like FL Studio, Logic also comes with two pitch correction devices. One is called “Flex Pitch,” and the other “Pitch Correction.” Pitch Correction’s GUI seems a bit dated, but you have control over standard features, such as Response, controlling the retune speed, and various options to adjust the root note and scale.

The VariAudio tool by Cubase allows you to edit each not individually, which is quite a helpful feature whenever a singer’s pitch is far from the actual destination. Their Pitch Correct plugin, in contrast, comes in handy when a noticeable T-Pain-like effect is desired.

I’m usually not a big fan of spending big money on third-party plugins since you don’t need 3.000 emulations of the same compressor, and modern DAWs already come with most of the tools you need to make music. However, checking out the free autotune options made me realize that decent pitch correction products might be worth their cost. If you’re on a tight budget and your DAW doesn’t have a stock alternative, I’d recommend giving Melda’s MAutoPitch, and AuburnSounds’ Graillon 2 a try. Nevertheless, I already plan to write another post comparing all paid options.