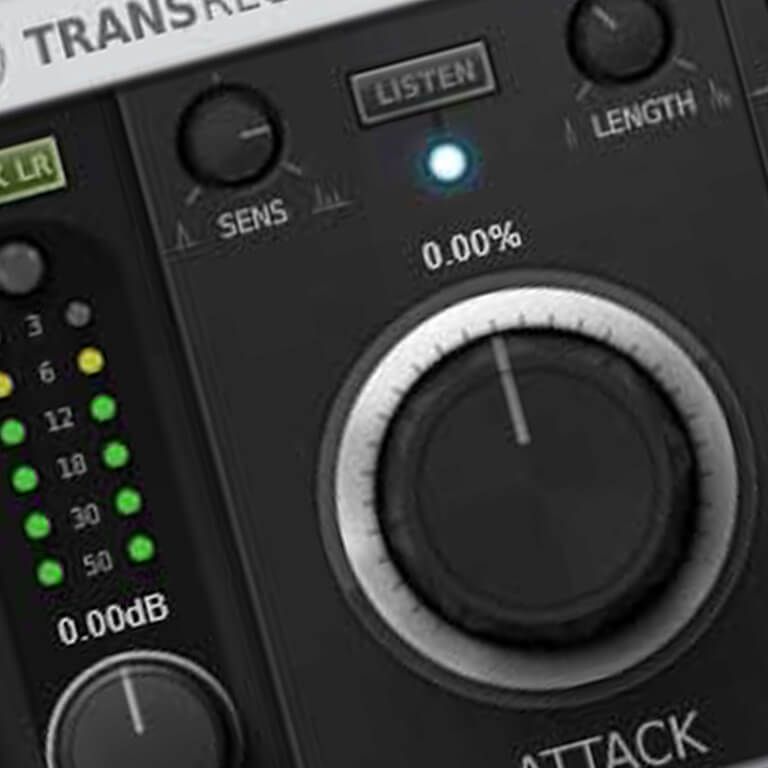 TransReckon is a transient shaper, empowering you to control the attack and sustain of any source sound. It’s available in different plugin formats, including VST, AAX and AU for Mac and Windows. As I’m writing this review it can be purchased for $66.80 via pluginboutique.com.

As you can see in the screenshot, TransReckon can be divided into different sections. On the top you’ll find a bypass knob, the preset menu and a flash icon (I’ll explain this one later). On the left and right sides you’ll find some utility controls and right in the middle is where you can adjust the transients. Although the plugin is already a few years old, it still looks good and all fonts are big enough to be readable.

The most important parameter for controlling transients is the big attack knob. Turn it down to decrease transients or turn it up to increase them.

To further adjust how transients are processed you can click on the “listen” button right above it. If it’s enabled you’ll only hear what TransReckon detects as transients. Now you can adjust the sensitivity parameter (SENS), which basically acts as something like a threshold. If turned all the way to the left for example, only the loudest transients will be detected. This is a great feature, especially while using the plugin on a drum bus, top loop or a real drum recording with mic bleed.

Once you got the sensitivity right you can go right to the length, which determines how long the transient shaping process takes. Small values result in fast attack times, while higher values result in longer ones.

This part is – again – based around a big, round knob. Turn it down to shorten up your source sound or increase it to bring out the room. Just like the attack section, the sustain comes with a sensitivity parameter, which however behaves slightly differently. You can hear this effect most clearly if you turn the big knob all the way up. If you start messing with the sustain sensitivity now, you’ll notice that turning it down will create an effect similar to the pre-delay, often found in reverbs. Alternatively you can enable the “FLAT” button, which tells the plugin to use the attack detection also for the sustain processing. Now the last parameter you’ll find in here is the length, which – as the name suggests – controls the duration of the sustain.

In addition to the main parameters, TransReckon comes with input and output volume controls, a dry/wet knob in the middle and an integrated limiter you’ll find on the right site. The flash icon I previously mentioned enables a fast mode, which is meant for reducing the CPU usage. If your computer is quite powerful you can simply ignore it.

After testing TransReckon for a while I can say that everything “feels right”. There aren’t any weird artifacts and since eaReckon made sure to include all the common utility controls it can seamlessly be integrated into your workflow.

I have to admit: after one of my producer friends recommended TransReckon to me I was a bit skeptical. The plugin is already a few years old and since its release many other transient shapers have been made. However, after downloading the demo version and playing around with it for a while I honestly feel that it somehow sounds better than similar plugins do (probably because you can fine-tune all parameters on your own). So if you’re still looking for a cool transient shaper, TransReckon is definitely one you should take a closer look at.